Grew up living in the white suburban area, I myself am really white wash. Even though I lived in a white place, my parents still expected me to carry out the traditional Hmong culture. Coming out as a gay queer cisgender male, I never expected there to be any other queer people of color. When I came out, I had the intention of my coming out experience to be more like the main stream coming out story of white folks; “Fuck this, fuck that, I’ll just live off being a gigolo.” Having this mental thought off how my coming out story will turn out to be like all these gay Caucasian, I was prepared to come out. I felt pumped, excited, and thrilled to handle the situation.

I thought I would break free from my cultural background. In reality, the truth was, my parents did take it hard like any other parents out there. My parents were mad, they were angry, sad, and lost as to what they can do for me.

About a month later after I came out, tears cease to exist, anger is six feet down, and a rainbow shines over. My parents became aware of who I am and that they in their right mind cannot change me of who I am. But me? I wasn’t really in the same state as I expected I was to be. I thought I would be like every other white gay person who came out. That life of white liberation. But no, I still had to adhere to my cultural heritage. I still have to uphold the Hmong traditions, norms, and values. There is no escaping that part of my life being a Hmong son. The only thing that may have been lifted off from me is that I won’t be getting married to a girl, but all other still applies. I may think I am different from any other Hmong man, but in the end, who am I really? I am a son, a brother, a fluffy boyfriend, a Hmong guy, a friend, a minority, a colleague, an activist, a special person. More truly, I am a gay son, a gay brother, a gay fluffy boyfriend, a gay Hmong guy, a gay friend, a gay minority, a gay colleague, a gay activist, a gay special person. I am but a gay man.

But I still hold true to myself of who I am to them; not as a white wash man, not as a man with privilege, not as any other person, but that is to myself that I am the oldest son of a Hmong family; a gay Hmong man.

A down to earth angel with a captivating sincere aura that draws in illumination. I am currently a student studying for my Dental Hygienist Major. Am also a full time working student to be able to support myself and my family as being the oldest son. Am very outgoing and funny.Also have a hobby thing for pigeon and did I forget to say that I LOVE COSPLAY! ^.~ You can contact Minji on facebook. 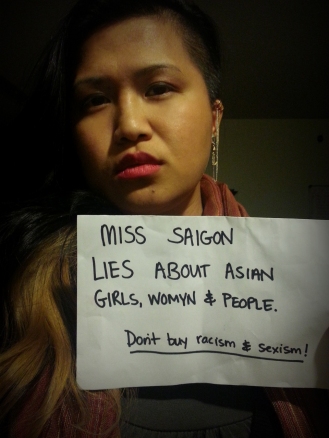 My name is Linda Hawj. I’m an artist, activist & organizer from Minnesota. As a 2nd generation, Hmong American, queer womyn of color, this is my truth.

What kind of Minnesota & country are we living in when Vietnamese people, Southeast Asians & Asian Americans, their history & experiences are compromised & violently eliminated repeatedly? All because White people & White Supremacy cries censorship about their White privilege no longer having the “freedom to express” their racist art. What’s truly sad & horrible is how White Supremacy have & continues to police & control what is Racial Justice & Equity, & the Non-Profit Organizations, leaders, politicians, funders & foundations who do “Racial Justice & Equity work” & serve the Southeast Asian, Asian American & Communities of Color. Your White Supremacy is all the Executives, Presidents, CEOs, Boards, Committees, funders & donors, majority all head by rich, White Privileged people that call the shots in their capitalist, political strategies.

3 Actions You Can Take to Support & Share to Mobilize:

3) The Don’t Buy Miss Saigon Coalition is taking both individual and organizational endorsements of its statement to stand in solidarity to end Institutional racism, sexism & colonialism. Contact us for more information: dontbuymisssaigon@gmail.com