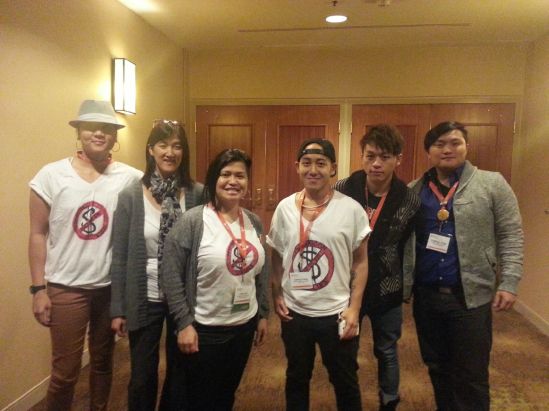 After resting for a week from campaigning with Blong Yang for North Minneapolis City Council – Ward 5, MWSM collective members head out to Los Angeles, CA to join Asian Americans Advancing Justice as they hosted the 2013 Advancing Justice Conference. Advancing Justice Conference is the first and national conference held together to focus on the rights and social justice of Asian Americans and Pacific Islanders (AAPI). The first time that MWSM had ever attended this conference was back in 2011 in San Francisco, CA with co-founders/organizers Chong Vang and Linda Hawj. Since then, MWSM have grown and brought along three other collective members, Minji Vang, Cuajleeg Yang and Maica Lelis. It was thought provoking, challenging critical thoughts and hands on experience for the new collective members to be in the space of progressive AAPI working toward advancing justice across ethnic, cultural, gender, sexuality, socioeconomic status, migration status, and geographical location borders.

“Attending the Advancing Justice Conference for the first time was an amazing experience. Being able to see all these panelists that talked about their experience was truly beneficial to the Asian American community. I am just thrilled, because I went there with not much knowledge, but I left the conference with much knowledge gained. Towards the end of the conference, we also had approached people about the “Don’t Buy Miss Saigon” petition and had them be a part of the signing to boycott this play. I believe that everything went to the best of its capacity, and overall, I would not mind going back to this same conference in the future.” – Minji Vang

“Advancing Justice Conference has emphasized different cultural, social, and political change that needs to happen. The different workshop enabled me to see the issues with different perspectives that I have never realized or would have thought. These changes that we advocates fight for are greatly connected and intersected. We can’t focus on one issue and ignore the rest. We have to be well versed or at least be exposed to these many injustices to better work and support our community.” – Maica Lelis

“The two workshops that really disappointed me was ‘Asians in the Media: Are we there yet?’ and ‘Stop Modern Apartheid and preserve our community.’ What made me disappointed in these workshops were the fact that they did NOT talk about the foundation of us Asians being racially categorized as so which then triggers Racism only to uphold White Supremacy.  I wanted to learn more about how we as Asian Americans are progressing through this white supremacist society because without this racial oppression there would be no need for this justice conference made to empower us.  All too often I have met or heard of us Asian people falling into the trap of whiteness and giving into the ‘fact’ that they are happy when in reality they are slowly suffering and only are sustained by the scraps of oppression.  Hope was re-established in me because I met a wonderful person who drew from his learning from Black Feminism and understood my frustrations with these speakers and their lack of awareness and/or internalized racism.” – Cuajleeg Kennedy Yang

Not only did we learn, share and connecte with AAPI across communities, but also a time to take actions for justice. Linda Hawj is one of core organizers with Don’t Buy Miss Saigon Coalition in Mn, and had organized MWSM members to canvass attendees, “guerrilla-style”. In endorsing the Don’t Buy Miss Saigon Coalition work, MWSM collective members informed and collected over 100 signatures to take a stance against institutional racism, sexism and colonialism.

Thank you! Join MWSM collective members next time as they take the lead to dismantling the system of oppression that constraints our communities.